In 2022 the Clean Air Action Network (CAAN) plans to
(1) protect area residents from Sterigenics (whose use of the known human carcinogen ethylene oxide to sterilize medical devices greatly increases the risk of cancer in the Glens Falls area)
(2)  organize local residents around the Hudson Falls trash incinerator.
(3)Continue to organize concerned citizens to prevent the siting of a huge new & unnecessary garbage project (Hughes Energy) in Fort Edward.

The Clean Air Action Network (CAAN)  sponsors Zero Waste Warren County.  Our active group of area residents meets once or twice monthly to identify ways to change the world (or at least, improve our local communities)! We have been working on numerous fronts to reduce wasting and improve recycling (through our transfer station revitalization project and by getting an oversight program for waste haulers established at the County level, which now has a full-time recycling compliance coordinator). We are developing a guide for hard to recycle items and creating a new project to reduce single use disposable plastic in local restaurants and cafes. Zero Waste Warren County has a spinoff — the not-for-profit Adirondack Composting Education Council — which is working on getting a commercial-scale food waste composting facility in the County. We also sponsor occasional webinars open to all.
You can follow the zero waste group on social media:  https://www.instagram.com/zerowastewarrenco/ and https://www.facebook.com/zerowastewarrenco/  Zero Waste Warren County will be launching its very own website in January 2022.

In September 2019 the Clean Air Action Network (CAAN) invited Neil Seldman, director of the Waste to Wealth Initiative at the Institute for Local Self-Reliance based in Washington, to speak to Glens Falls area residents. As a zero-waste expert, he urges municipalities to pay attention to the value of what we call garbage and just throw away. Thrown-away garbage in our area is commonly incinerated and might include repairable lamps, recyclable clothing, and food waste (which could instead be composted and used on farmland and in our own gardens)....when Tracy Frisch, the director of CAAN, formed the Zero Waste Committee to address shifting public habits from throw-away to re-cycle, repair, and composting...it all made so much sense. As a retired RN used to problem solving and wanting to make things better, I recognized the careless throw-away practices in my own backyard. My street in Glens Falls is 0.3 miles long. One Tuesday I counted seven (7) different private hauler company waste collection cans in front of my neighbors' homes filled with debris and ready for pick up. I called the seven companies when I got home and found out that three of them took everything to the local "burn plant" for incineration. The other companies used distant transfer stations where waste in their single-stream containers was supposedly sorted. While the single-stream system is easier for residents, potential recyclable items in recycle containers (such as paper products) are often soiled and contaminated and unable to be recycled, and yes, are then incinerated.

There is no local government oversight of private haulers even though Warren County is legally responsible for assuring source separation. It is actually against the law to throw away items that can be recycled. Our committee has been working closely with Warren County Public Works to correct this so the public can have more trust in their recycling efforts. And our persistence (such as going to County Zoom meetings and sharing our concerns and providing examples of other communities that do a better job) has paid off. Warren County is now starting a private hauler oversight initiative. Several municipalities in Warren County have their own transfer stations (dumps) which some residents use. I use the one on the Luzerne Road and sort my glass, tin, paper, plastic, cardboard myself (for free). These locations are rightly overseen by Warren County; and a cheaper way for residents to handle their garbage and assure recycling vs paying the private haulers. (We can also compost our own food scraps at home, too.) But many, many residents no longer go to transfer stations, and many, many recyclable, repairable, re-useable, compostable items are wasted.
Diane Collins,  Zero Waste Planning Committee
​EARTH ACTION SQUAD
earthactionsquad@gmail.com

​On zero waste:
​First of all "Don't buy stuff"
Statement from Solid Waste Advisory Board Manhattan:
Consumer demand drives Greenhouse Gas Emissions which cause global temperatures to rise.  Small increases in global temperatures cause sea levels to rise, crops to fail and excessive rain and drought. By 2030  climate changes will cause Manhattan and other parts of NYC to flood every five years rather than every 500 years. We will see the effects of sea level rise even locally on the Hudson River.

For every pound a consumer throws away there's 70 pounds of upstream waste (defined as mining, logging, refining, manufacturing and transportation that occurs between these steps before consumption). This part of the consumer process is approximately 50% of all GHG (Greenhouse Gas Emissions).
Zero Waste systems can reduce the generation of goods through increased re use, recycling and composting rates.
We need to decrease consumer demands for good, packaging and foods, and we need to increase re use, re pair re cycling and composting..

BUT we also need strong legislation (in NYS there is a fight for Extended Producer Responsibility legislation which did NOT pass the 2022 NYS Assembly...Senator Englebright has the best proposal out there though it falls short of a really effective protective policy. Any Green new Deal or climate mitigation legislation must include funding for Zero Waste programs that reduce the totality of carbon impacts from consumer demand for products, food and the assoicated packaging. Half of carbon emissions can be reduced by Zero Waste solutions.


​With 5% of the global population, we consume 30% of all the resources used worldwide.
We produce 30% of the world’s waste.
We produce 15% of all greenhouse gases.
​ 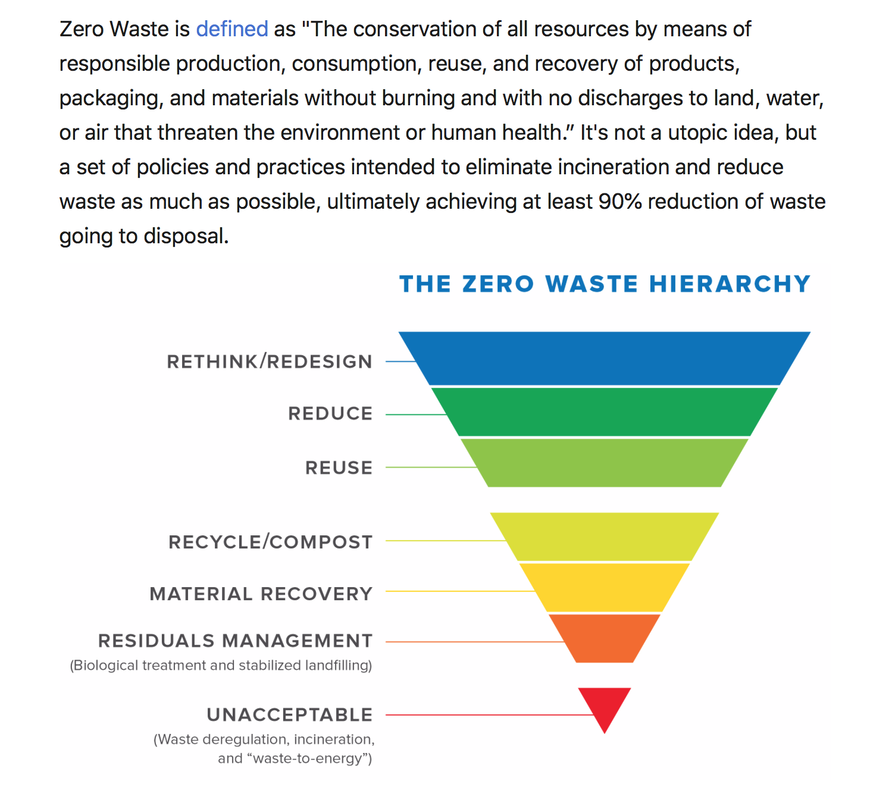 
​RECYCLING:
​PROBLEMS IN WARREN COUNTY AND NATIONWIDE:
Plastics: What’s Recyclable, What Becomes Trash — And Why

Letter to the editor and town board by Pema Reed (CAAN and Zero Waste) July 2021:
Emergency action is needed to protect the Hudson River from the overflow of polluted waste from Queensbury and  Glens Falls, NY.
To summarize the sewage effluent discharges due to heavy rains between June 16thand July 12th, 2021:
During this 4-week period of time, an estimated 280,000 gallons of sewage effluent have been released into the Hudson River from the Glens Falls Waste Water Treatment Plant at 2 Shermantown Road .
This is due it would appear, to the antiquated sewer pipes that are slowly being upgraded. The old pipes not only collected sewage from Glens Falls and Queensbury, but also fed all street drainage though the sewer pipes, therefore overloading their capacity during heavy rains. This caused the Waste Water Treatment Plant to order a controlled release of untreated sewage effluent into the Hudson River.
These outdated sewage pipes urgently need to be seen as a priority for the towns involved. The local legislative authorities must put this on their upgrading infrastructure agendas. Climate change in the Northeast appears to be causing record rainfalls that will exacerbate the sewage overflow situation.
Perhaps we do not realize the extent to which we are polluting our Hudson River, endangering the health of anyone attempting to swim or fish south of Glens Falls. This must be remedied.